Design a site like this with WordPress.com
Get started
January 14, 2020 mujahid

A video has emerged showing the incredible moment Iranian students refused to step on the flags of the US and Israel during anti-government protests calling for register change that started in Iran on Sunday night.

In the video clip taken at Shaheed Beheshti University, hundreds of Iranian students refused to step on the American and Israeli flags amid anti-government marches in the country and a warning to its leaders from Donald Trump to ‘not kill protesters’. 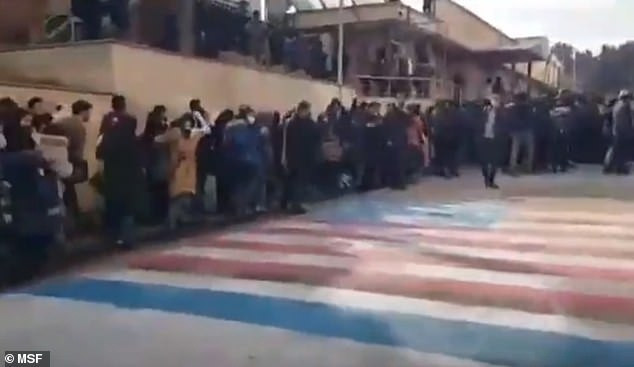 Thousands of Iranians on Sunday took to the streets of Tehran to protest against the Islamic Republic’s leaders, hours after the Iranian government admitted shooting down a Ukrainian jetliner killing over 100 people, with protesters chanting ‘death to the dictator’ and ‘you are the real ISIS’.

Iranians for over 35 years have been known for singing Anti-American songs, burning US and Israel flags and engaging in anti-American propaganda, but it seems the shooting down of the Iranian jet is the last straw for the Iranian people who are suffering from economic hardship, and could have faced a ravaging war if Trump had ordered a military attack on the country after Iran’s military attacked US bases in Iraq.

President Trump issued a stark warning to the leaders of Iran Sunday, tweeting in both English and Iranian language – Farsi:

‘To the leaders of Iran – DO NOT KILL YOUR PROTESTERS. Thousands have already been killed or imprisoned by you, and the World is watching.

‘More importantly, the USA is watching. Turn your internet back on and let reporters roam free! Stop the killing of your great Iranian people!’

This site uses Akismet to reduce spam. Learn how your comment data is processed.